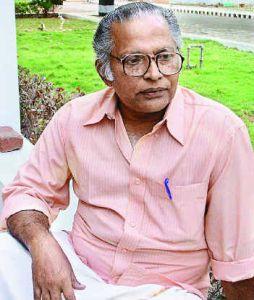 NOTED NOVELIST and Sahitya Akademi Awardee, Thoppil Mohamed Meeran is a living legend. His creative writing has been recognised by men of letters, both from within and outside the region. Tamil writers knew him as a fiction writer whose creative pieces came from a particular background surrounding Muslim culture. But it never came in the way of his recognition as a writer par excellence.

Meeran’s works are monumental showing academic brilliance, though he has never been an academic in the formal sense. All his works attain a certain respectability with a unique style, which is still recognised as a dialect, a fine mixture of Malayalam and Tamil.

Meeran had his initial education in Malayalam and therefore found it very convenient to record his thoughts in Malayalam scripts and later translated them into Tamil. “I went on writing for over three decades in Malayalam without getting anything published. But I have to accept that as Malayalam was not my mother tongue, I could not express all that I wanted to say about my village and its people in the best possible way. So I got my works translated into Tamil.”

For some readers, the mix of Malayalam and Tamil may affect the free flow of reading. And they have been making a forceful plea to Meeran to use only those words which are familiar to the local masses to ensure easy reading. But the writer is unperturbed. “I knew very well that such dialects will pose difficulty to the readers. I write to satisfy myself. I sincerely want to record my thoughts to the best of my ability.”

In fact, Meeran is of the opinion that replacing the Malayalam mixed dialects with pure Tamil words would in no way help in making the novel interesting. Rather, it would affect the flow of the work. “When the novel ‘Koonan Thoppu’ (Grove of the Hunchback), which dealt with the communal clashes, was reprinted, I did try to replace some of the sentences, but could not change even a single word. The local dialects have to positively find a place in the works to make interesting reading.”

People also complain that Meeran’s writings focus only on the happenings in and around Thengapattinam village and the fishermen community there. The people, places and events of the village have been immortalised in his novels and short stories.

“I can address only the local issues, in the language of the locals. The author should be totally aware of the community about which he wants to write.”

Sixty-year-old Meeran is the least controversial among the Tamil fiction writers and the magic he weaves with his words has surprised several contemporary authors. Meeran’s works are historicals, because they deal with the social changes he witnessed in his native Thengapattinam village in Kanyakumari district. “The writer and the society are inseparable. The experience undergone by the writer is nothing but the experience of the society. The writer happens to be the mirror of the society,” he says.

Does he have any role models? “No one as far as Tamil writers are concerned,” pat comes the reply. He reads a lot of works authored by other writers, but they never influence his writings. “I am sensitive to the feelings of the community close to me and record the same in my works. The authors who cannot read the mind of the society around them can not deliver the goods.” The author of `Saaivu Naarkali’ (Easy Chair), which won the Sahitya Akademy award in 1998, Meeran is sad that the Tamil literary world is running short of good critics, who moderate between the author and the reader. This is in sharp contrast to the Tamil literary scene in Sri Lanka. Scholars like Kailasapathy and Sivathambi have proved as renowned critics, but unfortunately the community in Tamil Nadu fails to recognise them and their services to Tamil language and literature.

He warns against the adverse impact of globalisation on the cultural ethics of the country in general and the rural environment in particular. The writers have to take a lead in creating awareness among the local people of the attack on our heritage.

Unfortunately, Tamil writers and Tamil media have remained mute spectators, he feels. However, Meeran is in full praise of Malayalam writers and the media in Kerala who are always up on their feet to protest this cultural assassination. Meeran’s simple message to budding writers is, “proper presentation and more attention to minute details without any complacency.”

His hit work, `Saaivu Naarkali’ was conceived much earlier but took about a decade of hard work for him to present it in the right form. That is the key to success, he reveals.